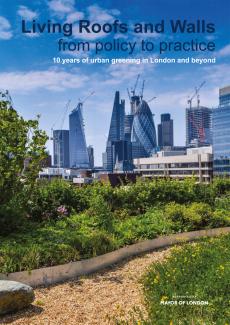 The new London Green Roof Report 2019 recently published reveals the remarkable growth in green roof space installed in London over the past 10 years. The report is published by the European Federation of Green Roof and Green Wall Associations (EFB) and Livingroofs.org on behalf of the Greater London Authority. Shirley Rodrigues, London’s Deputy Mayor for the Environment launched the report on 10th April 2019 at the EUGIC conference at Here East in the Queen Elizabeth Park. ZinCo as one of the global players in urban roof greening has contributed as report sponsor to support and promote the idea of green building facing the effects and challenges in a world of changing climate.

This new Green Roof Report measures the success of the Living Roofs and Walls Policy that was included in the London Plan in 2008. It also shows the tremendous progress in the provision of green roofs and walls in London over the last 10 years and how the policy has encouraged uptake in the absence of any financial incentives or mandatory requirement.

The report features the first complete map of green roofs in the whole of London. This map forms the centrepiece of a detailed infographic on the types/areas/density of green roofs per inhabitant. Such level of detail regarding London’s green roofs has never before been published before.

Whilst the research focuses on London, the report also provides a review of policies for green roofs and walls around the world. It contains a league table of green roof cities around the world ranking cities, not in terms of area, but of density of green roofs per inhabitant. This is based on research, as yet unpublished by Humbolt University, and research undertaken during the writing of the report. The league table sets London’s performance in a global context. allowing an assessment of the city’s achievements in the light of the progress that other cities around the world have made over the past 10 years.