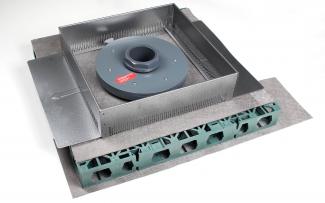 The flow controller is used to regulate to flow volume and attenuation height. It also works as an overflow. 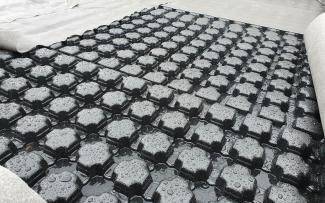 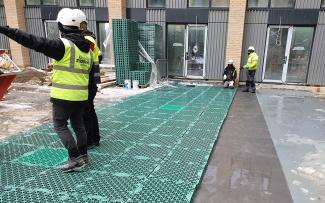 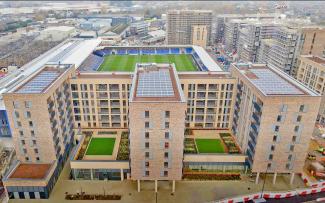 The huge mixed-use development at Wimbledon Grounds including vast 15,967 sqm area of “blue” roofs and “blue” podiums is one of the largest blue roofing projects in the UK.

Sustainability and ecology are becoming increasingly important in modern architecture. At the same time, urban planning solutions are urgently required to counteract the consequences of climate change such as heavy rainfall events and overheating of cities. This means that designers and architects will have to focus even more on roofs and podium decks with regard to rainwater management. The enormous potential associated with this can be illustrated with the huge mixed-use development at Wimbledon Grounds including vast 15,967 sqm area of “blue” roofs and “blue” podiums that makes it one of the largest blue roofing projects in the UK. The key feature of these blue/green roofs is the ZinCo system build-up “Stormwater Management Roof” which can not only store large volumes of rainwater and release them again over predetermined periods but also reduces the urban heat island effect by the huge amount of greened areas. The Green and blue roofs at Wimbledon Grounds are able to cope with over 1 million litres of water at full capacity. A prime example of urban development for the future.

This large-scale development located on Plough Lane is part of a 51,000 sqm regeneration masterplan for the brand new purpose-built stadium for AFC Wimbledon. The residential scheme surrounding the stadium comprises 600 homes as well as community, leisure and retail space. Every roof and podium in the Wimbledon Grounds residential complex is a “blue” roof, which incorporates a sustainable drainage system (SuDS) to prevent flooding and pollution. The project includes four large blue podiums with landscaped gardens situated for example over a car park or entrance hall and providing community space to the residents. In addition, the apartment block roofs have 26 blue roofs with a green roof installed on top. These are seeded with a biodiverse mix of native wildflowers, sedum and grasses. 15 of these blue-green roofs also house farms of solar panels to generate electricity for the complex.

The Wimbledon Grounds blue roofing system works on a cascade system. The blue roofs on the apartment attenuate storm water which is then gradually released by a flow controller over 12–24 hours to the larger reservoir in the 4 podiums of this building. The outflow from the podiums then also has a controlled release into the urban drainage system. Such measures have become necessary as London’s Victorian sewers are regularly overwhelmed by heavy rain events.

The ZinCo system build-up “Stormwater management roof” for the landscaped podiums consists of special RSX type retention spacers combined with precisely adjustable RDS 48 flow controllers, which also function as an overflow. ZinCo filter sheet PV is first installed below the spacer element to protect the waterproofing during construction and in service. The RSX spacer elements are then laid over the top and another layer of PV filter sheet over the spacer elements completes the build up. Over the top of this designers and contractors are free to install soft and hard landscaping alike. The RSX spacers have a load capacity of up to 50 Tonnes which means that even roadways can be constructed above them with the correct construction. At Wimbledon Gardens a mixture of Lawns, Intensive planting, resin bonded pathways and paving have been installed directly over the RSX attenuation layers.

A different build-up has been used for the blue roofs on the apartment rooftops as they have extensive green roofs over the top. Instead of the heavy-duty RSX type spacer elements, the much lighter retention spacer RS 60 was used which has the advantage of drastically reducing cost. A complete extensive green roof over the RS 60 spacer using Zinco drainage board Floradrain® FD 25-E was installed. Due to the lower substrate height on the extensive roofs the additional drainage element is required to allow sufficient permanent retention and supply of water to the plants even in dry periods. The drainage layer for the green roof retains water for the vegetation during hot dry periods but allows excess rainfall through to the blue roof below where it is attenuated and the outflow controlled.

To make this role model project a success, a close cooperation was required by all involved, and in particular ZinCo would like to thank Galliard Homes, Kingsley Roofing and ZinCo Approved installer, Pritchard and Pritchard.